My apologies for taking so long to write a new piece. As some of you may be aware, we recently launched a podcast series which we’ve been focusing some time and attention on, which you can find on Apple Podcasts, Spotify, Google Podcasts, or by clicking here.

I’m not claiming to be a soccer genius or expert coach by any means, but it can just be frustrating getting a pick-up or match in, and the same players who think they’re the reincarnation of Cristiano Ronaldo and are quick to brag about their playing careers when they were young just don’t understand basis principles of the game.

Here are 3 common soccer misconceptions that I notice on regular basis which drive me absolutely crazy.

Soccer is like a game of chess, whether your team is attacking or defending. When your team has the ball, how can you eliminate as many players from the opposing team, and manipulate numbers in attacking situations to your advantage?

If you’re building out of the back, your center backs are probably wide and opening up the space for the 6 to drop in and find it, your outside backs are up the field, and you’re trying to stretch the opposing team in an attempt to open up passing lanes and eliminate defending players. 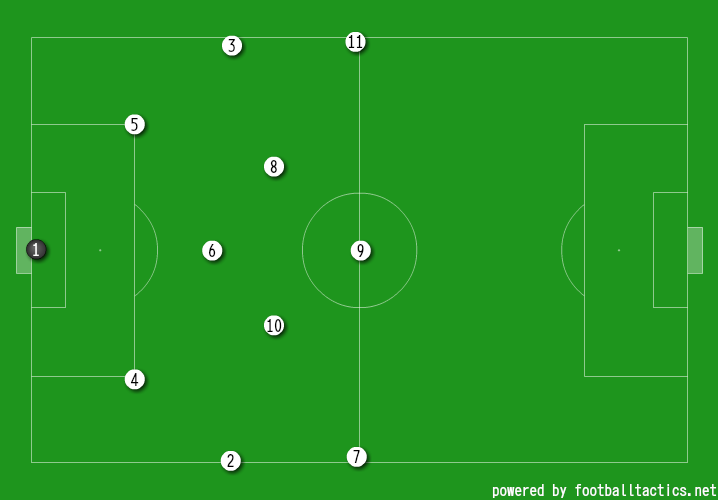 We’ll use Manchester City last season as an example.

Manchester City went on to win the EPL title in 2017-18 in convincing fashion, finishing with only 2 losses and 19 points above second place team Manchester United. They built out, Ederson was a genius with the ball at his feet, and for as good as City’s attacking players like Aguero and De Bruyne and Silva are, the reason why City are dominant is the offensive play from their back line and Fernandinho.

This season, Manchester City are once again on the top of the table, and a few of the usual suspects are among the top passers in England:

City have 4 players in the top 15 for EPL passing stats, and none of them are offensive players. Stones and Laporte (two center backs), Fernandinho (CDM) and Walker (right back) have combined to complete a total of 7,320 passes so far this season, which is 231 more than Cardiff City have completed as a team.

So back to the main point- defending vs playing defense.

If you’re defending against a team like Manchester City or Liverpool who you know have smart players in the back who can handle the ball, and who will be patient and pick out the right pass, and you’re one of the front 2 or 3 in charge of trying to disrupt their build up, your focus is to keep everything in front of you and try to cut off distribution between the CB’s and the 6, or between CB’s. You probably don’t want to be running around at full speed, chasing the ball, diving in to try to make every tackle, flying around like a madman, tiring yourself out and basically taking yourself out of the play every time you don’t win the ball.

If you’re a midfielder, your job is to keep everything in front of you, read the game, don’t over commit and take yourself out of the play because you’re running around like a madman trying to make 20 tackles.

If you’re a defender, and the forwards and midfielders have failed at this and have taken themselves completely out of the play because they’re running around like maniacs, chasing the ball and trying to make every tackle, you’re going to have your work cut out for you and you should be upset at your teammates. Unfortunately, and this comes from 32 years of playing soccer, a lot of defenders are probably going to be more upset at a forward or midfield player if they’re not running around “hustling”, blind pressuring the other team’s CB’s at full speed and basically eliminating themselves on every possession.

Playing defense isn’t about making a tackle. If you’re 1v1 in space as a defender, you don’t just have to worry about the attacking player going front, back, side to side. That player can go literally anywhere within a 360 radius, and once you go diving in the first chance you get, the attacking player knows they have you beat, and is gone and past you before you even realize it.

Again, I’m not claiming to be Ronaldo on the pitch or Guardiola on the sideline, this is just from my experience. The number of players who don’t understand the basic concept of proper defensive body shape – feet not square, staying low and waiting for the attacking player to commit to a direction and defending accordingly, moving your feet to keep them in front of you, versus diving in at the first chance and completely taking themselves out of the play- combined with the number of players who think that running full speed at an attacking player 100% of the time to “show hustle” and dive into every possible tackle, versus tactically cutting the field in half by cutting off a passing lane, is overwhelming in my opinion.

Go play a pick-up match sometime, indoor 5v5. Play up front, let the opposing 2 defenders knock the ball deep, drop in and keep everything in front of you, stay around midfield and connect with your teammates, play proper defense, and watch how many of your teammates are like “come on bro! run! go play defense! go get the ball! hustle!”.

2. Running Is How You Get Your Fitness In! Let’s Go Running!

Soccer is not cross country. To think that the movements that your body needs to be prepared to make on a soccer field can be replicated by running around in a circle on a track, or by going for a 10-mile cross country run around the city, is one of the most frustrating misconception on this list in my opinion, because there are actually Division 1 NCAA programs out there who spend the majority of their Spring and Fall off-seasons doing zero ball work and 100% “fitness” work.

I’m not saying that strength and conditioning isn’t important.

But when you’re actually playing soccer, you’re not just running. For anyone who has played, especially into your late 30’s and beyond, you are more likely to realize how many different muscles you use, and how many different movements you make, the next morning when muscles that you don’t even know you had are aching and you can’t walk for 2 days.

The change of pace, change of direction, movement with the ball, balance, and overall fitness involved in playing soccer can’t be prepared for by simply running. Yes, you might end up in better cardiovascular shape, but you’re not getting ANY repetition in the hundreds of different movements that you should be working on getting stronger at by not using a ball.

If your team spends 60% of sessions running laps, doing suicide drills and beep tests, and you come up against a team which spends 100% of their time in a structured 4-part training session where players are getting touches in and knocking the ball, you’re going to be in big trouble. I wish I could share some examples, but if you know of a coach who makes his or her players run without the ball for a majority (or even portion) of their training sessions, go watch how they look when they play against a team that focuses on touches, knocking the ball, movement, and getting fitness work in with the ball at their feet, and see how they look.

The common perception when it comes to the collegiate game is that college coaches are only looking for fast, strong, athletic players. There was a Tweet this week that said how important speed was to make it in collegiate soccer, which I personally took exception to because of the amount of coaching and work that has gone into developing youth players to be ready for the Division 1 collegiate level, and at NO point have I ever said to a player “you’re really fast, you’re going to excel at the collegiate level”. Once again, not to make this about me, but I grew up playing soccer in the area. I’m 6’2″, had decent  technical ability, good shot, etc. but pace was definitely not my strong suit. Some of the worst coaches I’ve ever played for or met judged me immediately based on how fast I moved. Some made comments about it, some belittled me over it. I will never tell a youth player that he or she is going to make it because they’re fast, because it’s just not true. Yes, you need to have pace, but it’s not a difference maker.

I’ve watched some of the fastest players you can imagine at the collegiate and professional level, I’ve played with guys with pace who went on to play for DC United and for various USL teams, and here’s what I would say about being fast- when was the last time you saw a guy (or girl) just completely blow by a defender on a run, leave him (or her) in the dust, and go score a goal? At the collegiate or professional level?

It might happen once in a while, but what you see a lot more often are players who have the awareness and experience to get the ball, go at a defender, and hit them with a CHANGE of pace, versus the predictable route of running at them at full speed, allowing the defender to judge where he or she is going because they’re completely predictable.

The game moves so fast at the collegiate and professional level that pace might be a factor for outside backs who need to cover ground in transition, but very rarely are you watching a match and a player with tons of pace and above average technical ability is making the type of impact that equates to the amount of attention some coaches (and others) give when it comes to evaluating ability and potential.